Computer Space was the first "coin-op" game, and was realized without even a microprocessor!

The entire computer system is a state machine made of 74-series TTL chips. Graphic elements are held in diode arrays.1

The cabinet of Computer Space: 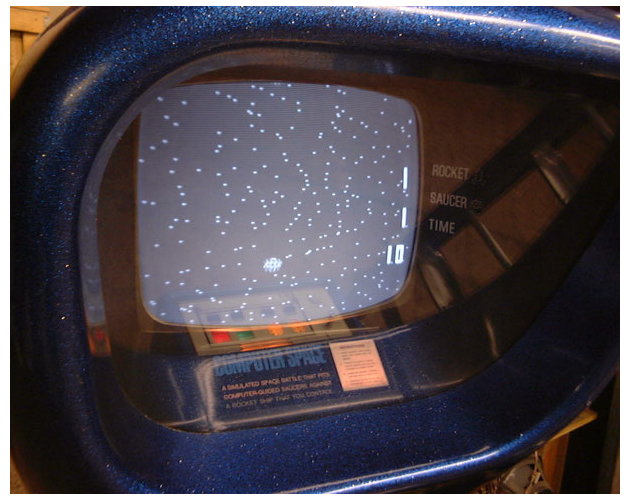 Atari was a "startup" of the '70, and even Steve Jobs and Wozniak worked here (Bushnell could have been an Apple cofounder himself, but turned down the opportunity).2

Atari had many souls: we can split its history into three parts.

The first company lived from 1972 to 1984. After the video game crash of 1983, Jack Tramiel purchased Atari from Warner, but Warner retained the "Atari Games" division sold to Namco.

Tramiel developed the Atari ST. Then in the 1996 the failure of the Atari Lynx handheld console and the Jaguar 64bit console brought Atari out of business and was eventually acquired by JTS Corporation for a short period and then by Hasbro

In 2000 the French software publisher Infogrames created Atari SA company, coming back to releasing games like Never Winter Nights (RPG) and V-Rally. Sometimes you see the Atari logo in the games released for Xbox and PlayStation: now Atari is an intellectual property holder, and no more hardware is produced.

Atari tried to capitalize its history announcing in 2017 the Atari VCS, hardware but the launch was delayed up to the end of 2019, and we are still waiting.... By the way, it is rather difficult to enter in the console videogames nowadays.

Atari produced Pong as a coin-op game, then Atari decided to produce an home version. 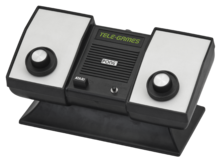 Pong was the first commercially successful video game, which helped to establish the video game industry along with the first home console, the Magnavox Odyssey. The company released several sequels which built upon the original's gameplay by adding new features.

Pong was the first game developed by Atari.

After producing Computer Space, Bushnell decided to form a company to produce more games by licensing ideas to other companies.

Allan Alcorn created Pong as a training exercise assigned to him by Atari co-founder Nolan Bushnell. Prior to working at Atari, Allan Alcorn had no experience with video games.

To acclimate Alcorn to creating games, Bushnell gave him a project secretly meant to be a warm-up exercise.

The company announced Pong on 29 November 1972.

When the company did file for patents, complications delayed the process. 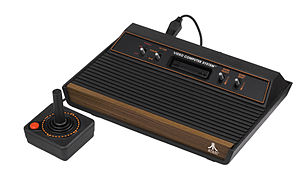 The Atari 2600, originally sold as the Atari Video Computer System (VCS) is a home video game console from Atari, Inc. Released on September 11, 1977, it is credited with popularizing the use of microprocessor-based hardware and games contained on ROM cartridges, a format first used with the Fairchild Channel F in 1976.

Ultimately, the consoles were shipped to retailers in November 1977.

Atari 2600 deserve a detailed hardware description because it was the first home computer console sold in huge quantities. Also, it is the only console which survived to the video game crash of 1983, because it was very cheap to produce and keep going up to 1992!

The 6502 will be the dominant chip of the 8-bit computers of the '80. For instance, Microsoft Basic will be developed for this chip and sold to various company. So it is not a surprise the 6502 and variant are shared by Atari, Commodore and NES, even with variants.

The designers of the Atari 2600 selected an inexpensive cartridge interface that had one fewer address than the 13 allowed by the 6507, further reducing the already limited addressable memory to 4 Kb (2^12 = 4096).

Initially, each VCS game fit into a 2K ROM so having double the address space seems okey.

Later games get around this limitation with bank switching, up to the 32Kb limit.

So the memory map was:

The console has only 128 bytes of RAM for scratch space, the call stack, and the state of the game world.

Programming was hard because:

The name Intellivision is a portmanteau of "intelligent television"

In 2009, video game website IGN named the Intellivision the No

Mattel Electronics would become a subsidiary in 1981

In public, the programmers were referred to collectively as the Blue Sky Rangers

Mattel Electronics' team of programmers was diverse in experience and talent, proving to be an advantage

Two tracks are read only for the software, and two tracks for user data

It uses the Intellivision's power supply

Mattel provided a full refund but without a receipt paid $550 for the Keyboard Component, $60 for the BASIC cartridge, and $30 for each cassette software

Many of the units were dismantled for parts

In the fall of 1982, the LUCKI, now renamed the Entertainment Computer System (ECS), was presented at the annual sales meeting, officially ending the ill-fated keyboard component project

In the end a half-dozen software titles were released for the ECS; a few more were completed but not released

Mattel Electronics planned to use that connector for wireless hand controllers

In the spring of 1983, Mattel introduced the Intellivision II

Activision and Imagic began releasing games for the Intellivision, as did hardware rival Coleco

Still hiring continued, and optimism that the investment in software and hardware development will payoff

Amid the flurry of new hardware and software development, there was trouble for the Intellivision

In 1983 the price of home computers, particularly the Commodore 64, came down drastically to compete with video game system sales

The market became flooded with hardware and software, and retailers were ill-equipped to cope

The response was underwhelming

On February 4, 1984 Mattel sold the Intellivision business for $20 million

Valeski found investors and purchased the rights to Intellivision, the games, and inventory from Mattel

When the inventory of games sold out they produced more, but without the Mattel name or unnecessary licenses on the printed materials

They continued to work on Intellivision, Colecovision, and other computer games

Also in 1987 INTV Corp released Dig Dug, purchased from Atari where the game was completed but not released in 1984

It is a modified Intellivision, the case molded in light beige with gold and blue trim

These compilation CDs play the original game code through emulators for MS-DOS, Windows, and Macintosh computers

Also in 1999, Activision released A Collection of Intellivision Classic Games for PlayStation

for the Nintendo DS including one never before released game, Blow Out

One includes 25 games the other ten

As such they look and play differently than Intellivision

As with many of the other Intellivision compilations, no games requiring third party licensing were included.