Commodore 16 and Plus/4: the big failure​

1984 is a pivotal year: Tramiel left Commodore at the beginning, for unclear reason, but mostly on disagreement on how to manage the company in the future.

Atari just failed, Apple was in trouble and Commodore was the company selling or licensing the MOS6502 8bit CPU to the rest of the world.

In the 1984 Commodore launched two version of the same base machine called Commodore 16 and Commodore Plus /4.

C/16 was aimed to home whereas Plus/4 should be a "business" machine.

The two units are based on the same hardware: the difference is the amount of RAM of each.

As we will see these computer was a big mistake because failed on a lot of critical aspects:

Perhaps Tramiel was thinking yet in term of a "calculator" you must turn on and get the software inside, but providing this software on floppy or cartridge would be a way better.

On the same time customers start to buy IBM PC, and Apple computers. 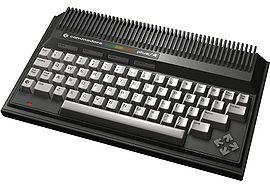 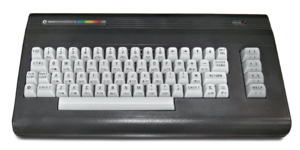 The Commodore 128 is the last 8-bit home computer that was commercially released by Commodore Business Machines (CBM). Introduced in January 1985 at the CES in Las Vegas, it appeared three years after its predecessor, the bestselling Commodore 64.

The C128 is a significantly expanded successor to the C/64, with nearly full compatibility.

For C/128 we are lucky because we can know the story directly by Bill Herd19 head of the C/128 Project (edited by us):

The Z80 started by me looking at two problems at roughly the same time: 1) The CPM cart was having problems with the C/64, and was sensitive to the version VIC chip and also a brand of 74ls257's, 2) the CPM cart needed about another 1 to 1.5 Amp from the power supply. The C/64 supply just gets hotter and the voltage drops, but the C128 being a switching supply meant that I would have had to specify and pay (times millions) for an extra 1.5 Amp that would probably seldom get used.

Designing the Z80 in costed about $2, and was cheaper than the power supply increase.

So, Z80 was here as a workaround to avoid adding a bigger power supply to the C/128!

Later the Z80 saved our asses when the Magic Voice cartridge (designed by CBM Texas) would crash on a C128 when it tried to jam the reset vectors at boot which would crash since the system was in C128 mode w/ MMU wait[u]ing to be initialized, etc. Overnight we inverted the reset line and called Von the Z80/CPM guy (he wasn't home but his wife was a programmer and read me the assembler code to punch into the eprom burner) and from then on the Z80 booted first. It would carefully look at the cartridge port and if it saw a C/64 cart it would set up the MMU/PLA and then jump to C/64 mode. This is when we also decided to make the C= key be a hard C/64 mode start.

We didn't tell management that we had built in the Z80 until it was too late to stop us. We got a telex from CBM Australia telling us that they would "personally" open the C128's and remove the Z80s if we insisted on shipping with it, which just made us want it more.

Frank Palaia was tasked with all of that crazy jungle logic needed to make the Z80 work using packages already on the motherboard, A PAL would have been safest and easier but it was too costly, took too much power and we didn't make the chip (The Z80 was a rare exception to either using jellybeans or CBM chips.)[...]

The other processor was the MOS 8502, a small evolution 6502. A Memory Management Unit (MMU) was provided to access to the 128Kb via bank switching,

A full feature Basic V7 by Microsoft was provided. 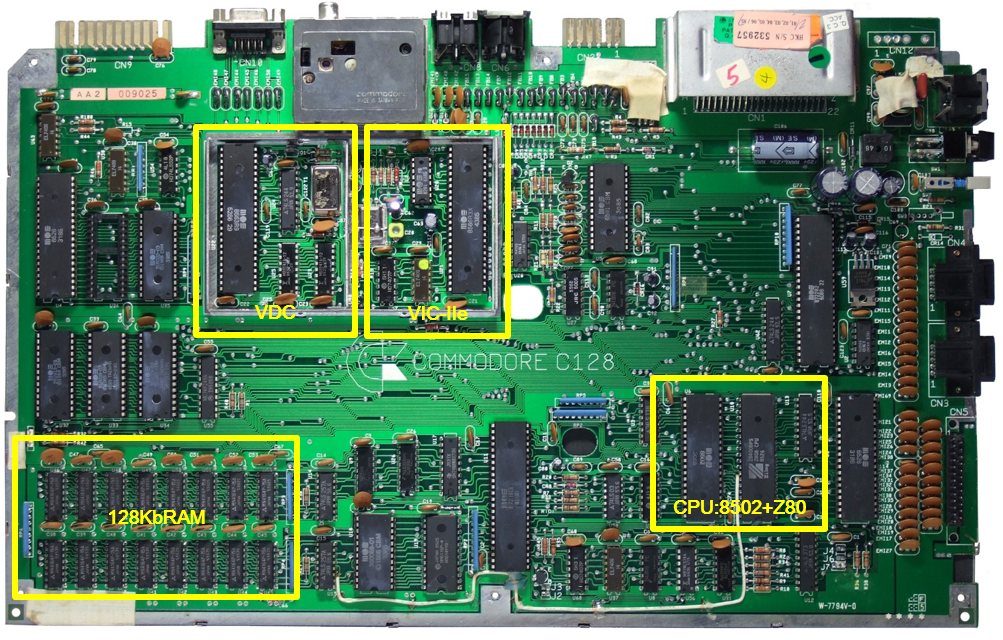 MOS 8502 could ran at 2Mhz by the main VIC video chip could not work at that speed and need to be disabled (blank screen). Because little software used the other video chip (VDC) this "FAST" mode was difficult to use: if you get blinded, you for sure cannot show faster screen refresh.

Also, the chip needs banking to access to more memory. Basic V7 tried to use all the 128Kb but was slower then BasicV2 because of bank switching and more commands to address.

As you see in the diagram above, VDC was equipped with 16Kb of video RAM, so it can work on its own. Anyway

Will show you the authors of C/128 also with a "pacific" message in reverse: 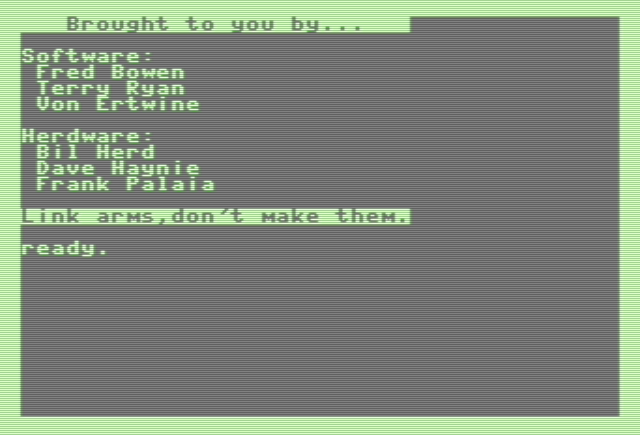 C/128 was a dual head monitor computer with two CPU and very advanced Basic. Its VDC 80-column mode would position it to the office segment, anyway it shipped without disk drive and with little basic memory for the time it was announced.\ So it was a more pricey machine mostly used in C/64 compatibility mode.

In Italy, a magazine called Commodore Computer Club decided to stop publishing C/128 programs while continuing to support C/64 for a while (!) which was a clear signal of the status of the C/128 acceptance by the market.

Price and some bad decision doomed C/128, even if its Basic was powerful and nice. Perhaps if C/128 was delayed a bit, the project would fix some of its bigger mistake like unusable VDC chip.\ C/128 will be discontinued in 1989, after 4 years.

There is an important lesson I'd like to stress here. I call it software "inertia". In mid '80 there were a huge number of companies which lived developing software for C/64. At some point C/64 become very difficult to kill. Commodore was forced to continue production, and C/128 never took off like expected. C/64 survived to two computers generation (C16+PLUS/4, C/128) how was it possible?

C/64 for sure was cheap: in 1986 the "C64C" was a 4-years-old computer produced in a different form factor but with exact the same functionality (more or less) as we saw. It was cheap to produce and cheap to buy.

It was a missed opportunity. If the C64C was a C64 with for instance a bank switching functionality (to address 128Kb of RAM), something like the SuperCPU, but with full retro-compatibility, it could lift the Commodore again.

Or a VIC-III with some retro compatibility. Or two stereo SIDs. A clean migration path from the C/64 to another machine would be great, but was it too complex to achive?